Also known as Batuk Bhairav Mandir is mostly attended together with Varanasi’s Kashi Vishwanath temple by pilgrims. It’s in the old city, a short distance from Kashi Vishwanath’s main temple and the ghats. The temple is located in a tight alleyway, and when you enter the temple, you will hear chants and Located at the union of the River Ganga and Assi river, Assi Ghat is known for its historical importance and mythology. The ancient history reveals that the Goddess Durga threw her sword in the river after killing the demon Shumbha-Nishumbha after which the place was named Assi ghat. Dasashwamedh Ghat is one of the oldest, most spectacular, and significant ghats in Kashi, located on the Ganges near the old Vishwanath Temple. The Ghat (river front) of the ten sacrificial horses is the literal meaning of the Dasashwamedh (Das means 10,

One of India’s popular tourist destinations for its holiness and sacredness, Varanasi is the most ancient city where you can see, hear, smell and taste some of the remarkable histories and ancient Hindu mythologies. It is the most sacred Hindu city in India, a place where people come to bathe in the Ganges river to wash away their sins and where others come to die with the hope that they will be removed from the human cycle of suffering.

History claims that the banks of Kashi was the land, first occupied due to the Aryan Settlement and by the end of the 2nd millennium, the holy city became a potent area for the Aryan religion and philosophy. Since the population grew, heavy industrial trades and commercials occupation started to take place. The city then started to gain recognition for the productions and sales of muslin, religious and cultural sculptures, oil perfumeries, and silk fabrics. Sooner the City of Kashi became the capital around the 6th century during the time of Buddha.

You can walk around the holy river, can take bath to wash your sins and can also witness a funeral procession marching down the alley. It’s a city where you can taste some delicious street food and cuisines. POPULAR PLACES TO VISIT IN VARANASI 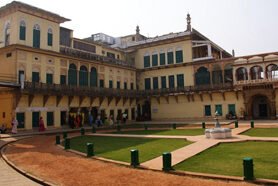 THINGS TO DO IN VARANASI

Every middle-aged person living in India dreams of visiting Varanasi at some point in his/her life due to religious and historical prominence of the region. Considered as one of the holiest cities in India, it has loads of temples and ghats that host endless lines of pilgrims from all over the country. In addition, the passing of the holy river Ganga in the city is no less than a blessing that every person wants to cherish.

Being the holy capital of India, Varanasi is considered to provide you with the best travelling experience. No wonder you will find as many hotels in Varanasi as there are temples, and there are more than 2,000 temples in Varanasi alone that gives the deep historical background and the rich cultural importance of the country.